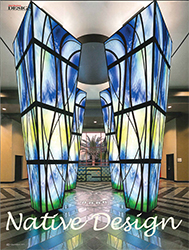 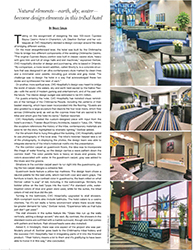 Taking on the assignment of designing the new 102-room Cypress Bayou Casino Hotel in Charenton, LA, DeeAnn Switzer and her colleagues at CVC Hospitality devised a design concept around the idea of bridging different worlds.

On the most straightforward level, the hotel was built by the Chitimacha Tribe to bridge two different components of the existing Chitimacha Casino. “The original Cypress Bayou portion was built in classic casino style, heavy with gold trim and full of bingo halls and slot machines,” explained Switzer, CVC Hospitality director of design and purchasing, who is based in Orlando. “By comparison, a more recent addition, called Shorty’s, is a concrete structure that was designed in an ultra-contemporary style marked by clean lines and a minimalist color palette, including gun smoke and gray metal. The challenge was to design the hotel in a way that acknowledged these two styles and synthesized the best of each.”

On another, more spiritual level, CVC Hospitality’s design was meant to bridge the world of nature-the waters. sky and earth held sacred by the Native People-with the world of modern gaming and entertainment, and of the past with the future. The interior design budget was estimated to be $15 million.

For guests entering the hotel, CVC Hospitality has installed visual reminders of the heritage of the Chitimacha People, including the patterns of their basket weaving, which have been incorporated into the flooring. “Guests are also greeted by a large sculpture that depicts the four local rivers, which flow across Chitimacha land, as well as the cypress trees that are sacred to the tribe and which give the hotel its name,” Switzer reported.

CVC Hospitality created the custom-designed piece with input from the hotel’s architect, Thalden Boyd  Emery Architects, based in Tulsa, OK. “While the sculpture references the history of the tribe, contemporary materials are used to tell the story, highlighted by dramatic lighting,” Switzer added.

For the artwork that is hung throughout the building, CVC Hospitality opted to use photography of the local area. The tribe’s historian helped take a lot of the photography. In displaying the photos, the design team was able to integrate elements of the tribe’s historical motifs into the presentation.

For the corridor carpet on guestroom floors, the idea was to incorporate the image of water flowing, so the design carries a wave pattern down the corridor itself. The color palette here is heavy on blues and greens, the colors associated with water. In the guestroom carpet, gray was added to the blues and the greens.

Striations in the corridor carpet seem to run right into the guestrooms, giving the two carpet designs a cohesive feel.

Guestroom beds feature a pillow-top mattress. The design team chose a neutral palette for the bed units, which had both cool and warm grays. The furniture is black. As a contrast color in guestrooms, the team relied on what Switzer called “a pop” of red, including in the wall coverings. Similarly, the bolster pillow on the bed “pops into the room.” For standard units, water inspired colors of blue and green were used, while for the suites, the tribal colors of red and blue did the job.

Turning to the bathroom, CVC Hospitality upgraded to stall showers. ADA-compliant rooms also include bathtubs. The hotel caters to a casino clientele, “so it’s not really a family environment where there would likely be greater demand for tubs,” Switzer noted. “Experience tells us that tubs just don’t get used.”

The stall showers in the suites feature tile. “Glass tiles run up the walls vertically, adding a design accent,” she said. By contrast, the showers in the standard rooms are outfitted with a marble surround, though one that comes with pattern and texture. Rain showerheads were also installed.

Asked if, in hindsight, there was one aspect of the project she was particularly proud of, Switzer goes back to the Chitimacha tribal history and the success CVC Hospitality had in integrating parts of it into the finished product. “Their history means a lot to them and it’s gratifying to have been able to honor it in this way,” she concluded.